Did you know that Autism is now being linked to the amount of toxins in our environment? Strong evidence exists that industrial chemicals widely disseminated in the environment are important contributors to what we have called the global, silent pandemic of neurodevelopmental toxicity (1).

The amount of toxins we are being exposed to in about one week is the same amount that our grandparents were exposed to in five years. Let that soak in… There are chemicals in our food, water, the air we breathe, the clothing we wear, the carpet we walk on, and the plastics that surround us. In the last 70 years, humans have created approximately 70,000 chemicals and very few have been tested to the proper amount before they are released (2). No one, not even the Environmental Protection Agency (EPA), knows how many chemicals are in use today (3).

In fact, we have more than 700 synthetic chemicals in our body that are not naturally part of the human body chemistry. There is no data for the total effect of consumers’ chronic and cumulative exposure to chemicals from pesticides, heavy metals, phthalates and the list goes on (4). It is concerning how little is actually tested, in particular the chemical reactions when other chemicals are present with each other.

“Your child may never speak or communicate with other people and will most likely have to speak through a computer for the rest of his life.”

Natalie Pelto’s son was diagnosed with Autism at the age of two. Her family practitioner at the time noticed that her son was not speaking nor making eye contact with others. Ten years ago, it was roughly 1 in 80 children that were diagnosed with Autism, now it is 1 in 57 children and some say it is closer to 1 in 37 (5). Over the next few years Natalie’s son received many assessments and therapies from doctors, occupational therapists, and speech pathologists with very little results. She was told that her child may never speak or communicate with other people and will most likely have to speak through a computer for the rest of his life.

Natalie could no longer accept what her doctors were telling her, so she started researching the internet for answers. She found articles explaining how food is medicine and that what we put in and on our body has such an impact that it can make us extremely ill. She found articles of other women  claiming  they have cured their child’s Autism naturally by using food and lifestyle changes. She received what she was looking for, a glimmer of hope.

Natalie immediately changed her entire family’s diet, removed inflammatory foods, and did a complete lifestyle intervention. Within 3-4 months she noticed a significant difference in her son. He was speaking, playing, mimicking and making eye contact with others, and even became potty trained. This was a monumental feat because at this time he was five years old and it is a common issue for those with Autism.

Natalie continued to learn and make changes in her household and at around  seven years old, her son’s diagnoses was removed.  Natalie attended his school meeting and for the first time she left with tears of happiness vs hopelessness. Her son was doing great and right on track. All she ever hoped for was for her son to be able to communicate a little bit. She feels lucky to have found something that changed her family’s lives.

“Genes are impacted by the environment that we are in.”

The world of Autism is growing in numbers but also shifting in understanding. What was once believed as being a genetic disorder is now being understood more clearly through epigenetics. Which is the study of how your behaviors and environment can cause changes that affect the way your genes work. Unlike genetic changes, epigenetic changes are reversible and do not change your DNA sequence, but they can change how your body reads a DNA sequence (6).

According to Natalie, the autism world holds onto this idea that autism is something we are born with. We now know most of our genes are impacted by the environment that we are in. We all have these genes and the environment determines if they are switched on or off. Very little is actually truly genetic anymore.

Natalie Pelto has spent the last 20+ years in healthcare as a front-line worker specifically in diagnostics, cat scans, x-rays and bone mineral density. Since her son’s diagnosis, she has branched into Functional and Integrated medicine with multiple certifications in nutrition, detoxification, nutritional therapy, advanced brain and child development with nutrition and lifestyle and nutrition medicine.

Autism matches the curve of the amount of chemicals introduced into our food, more specifically Glyphosate. “Glyphosate is the most commonly used and intensively used herbicide worldwide” (7). Chemicals like Glyphosate in just a few servings destroy the gut lining which is where all of our immunity and ability to heal is. According to Natalie, the average woman before she goes to work has touched over 500 chemicals before she goes to work. We are being exposed to approximately 700,000 (which is a moderate number) on a daily basis (8). 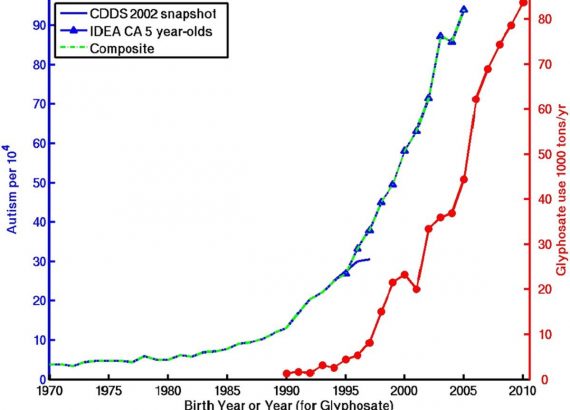 Toxicity is engrained in every action in western culture. We are ingesting, putting on our skin, and breathing toxins all day, every day. It is in everything from cell phones, clothing, mattresses, makeup, and antiperspirants. After listening to Natalies story, a detox is the key to reversing the Autism diagnosis. A detox is a huge undertaking and it is not just for the child but for the entire family. Natalie supports parents so that this type of lifestyle is obtainable. Healing Autism heals the entire family.

“Toxicity is engrained in every action in western culture.”

Natalie’s detox program is not your typical fasting program, it is a lifestyle intervention. Natalie’s Detox is a four-week program that is a safe and for everyone. This detox looks at your environment chemically, spiritually, and your diet. People can leave this detox with a new lifestyle for the entire family. There is no pressure to fully change your life, but if anything you will most likely walk away with one thing that sticks in your life. Natalie has witnessed children go from completely non-verbal, to videos of them singing. She even addresses picky eating, which is a common trait in children with Autism.

Natalie usually works with healing Autism, however she has observed that removing certain food colorings, sugars, increasing their water intake, using gut healing probiotics and omega 3s, along with lifestyle changes like sleep, can help heal attention deficit disorder (ADD and ADHD). Most physicians and research indicate the increase in ADHD is directly linked to a child’s diet, sleep patterns, and even how they breath (9).

The power of the environment is the medicine. What we put in and on our body and consume visually and auditory all matter.

For more information you can email emdhealers@gmail.com or visit www.nataliepelto.com. She shares a lot of good content on Instagram, specifically for healing children at iamnataliepelto and for healing in general Emdhealers.

You can sign up for her detox program, as well as many other 1:1 mentoring programs here.

3: Chemical and Engineering News: How many chemicals are in use today? by Britt E. Erickson Posted on February 27, 2017