According to the National Institutes of Health, Up to 23.5 million Americans (more than seven percent of the population) suffer from an autoimmune disease—and the prevalence is rising.  Nearly 4% of the world’s population is affected by one of more than 80 different autoimmune diseases, the most common of which include Type 1 diabetes, multiple sclerosis, rheumatoid arthritis, lupus, Crohn’s disease, psoriasis, and scleroderma.

Immune system disorders cause abnormally low activity or over activity of the immune system. In response to an unknown trigger, the immune system may begin producing antibodies that instead of fighting infections, attack the body’s own tissues.  Treatment for autoimmune diseases generally focuses on reducing immune system activity (source WebMD,).

Then there is fibromyalgia, which is commonly diagnosed along with an autoimmune disease.  If you have one, it is common to have the other.  Fibromyalgia is one of the most common chronic pain conditions. The disorder affects an estimated 10 million people in the U.S. and an estimated 3-6% of the world population.

Fibromyalgia is a condition that causes chronic pain throughout the body. Many experts believe fibromyalgia causes the brain to sense higher pain levels, but the exact cause is unknown. It may also cause: fatigue, anxiety, nerve pain and dysfunction.  There’s currently no cure, but treatment options focus primarily on pain management to reduce symptoms. 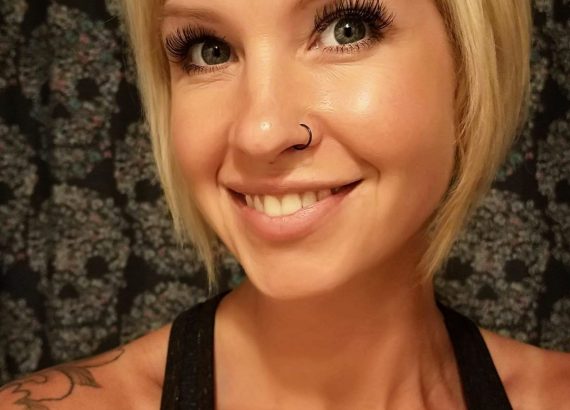 Kelly Harmon was one of these people.  She experienced pain most of her life.  She always attributed it to her extreme dance training at a young age.  Kelly started noticing more pain than usual throughout High School, but was never taken seriously by her family or doctors.  Because of this, she learned to shut down her feelings.  Years later in her early 20’s, her mom and grandmother (who was like a mom) passed away.  Her pain became no longer manageable.  She was no longer able get out of bed.  She questioned if feeling bad all the time was normal, having a job that involved heavy lifting and standing on her feet all day.

At 24, she went to see a rheumatologist, she figured being a very active person with a dancers body, she could have developed something like this.  She describes her pain like the feeling when your hand falls asleep with barbed wire wrapped around it all over her body.  Kelly was diagnosed with fibromyalgia and was prescribed a long list of medications for her diagnosis.  Her pharmacy bill was over $600 and was not within her means and sought help elsewhere.

She went to a neurologist to find different treatment.  They pin pointed every issue and prescribed medications for each one.  She was prescribed an opiate for her pain, Motrin 800 for her inflammation and gabapentin for nerve pain.  Each visit they would adjust the levels based on how she was doing.

During this time came the opioid crisis.  It is not difficult to be flagged as an addict if you took too much of your medication or selling if you took too little.  They would take it away and the person would be left to withdrawal.  Kelly cannot count how many times she had to withdrawal off of an opiate because her levels were off or they were suspicious.  If she visited the emergency room for an extreme pain, she was flagged for being an addict.  You can imagine the amount of frustration one must feel being treated this way.

She spent the next six years visiting doctors and adjusting medications.  During this time she got pregnant and gave birth to a healthy baby (Mind you doctors told her she was never going to be able to have a baby and if she did it would not be healthy).  After having the baby, she lost all her baby weight – 80+ lbs in six months.  Her body was not absorbing any nutrition and her skin turned gray in color.  She was down to 80 lbs and knew there was a problem.  She received a colonoscopy and was diagnosed with celiac disease.

She started going to a pain clinic in Detroit, which was a more progressive clinic than she had experienced in the past.  In 2015, she had a visit when she was complaining of another side affect.  They wanted to prescribe her something to help with a side effect from a medication for a side effect.  That was her last straw.  She decided to get off all medications (which she carefully researched prior and found that she would not die from withdrawing from her medications that she was on).  During this time period, she was on 13 different medications.

How to Heal Auto Immune Disease and Fibromyalgia Naturally

She was extremely fed up with with her care and decided to figure it out on her own.  She joined a Facebook group Fed up with Fibromyalgia where she received support and community.  She started to learn about the chemicals in food.  How glyphosate, used as a herbicide in farming, is the cause of celiac, not the gluten.  How autoimmune disease is linked to a major magnesium deficiency due to increased amounts of fluoride, chlorine and calcium; depleted soil and magnesium deficient produce; poor diets especially ingestion of processed foods; stress; insufficient stomach acid; reduced level of transport proteins; low water consumption; diseased intestines for instance Candida albicans overgrowth; increased phosphorus in diet sodas or increased potassium or sodium; supplemental iron, which can impede magnesium absorption; high consumption of tea, spinach, soy powders, soy milk, and chard, which have ingredients that interfere with magnesium absorption, many different medications, and insufficient vitamin D, which is necessary for the body’s utilization of magnesium.

How Aspartame is linked to fibromyalgia; something Kelly drank a lot during High school and in her early 20s.  And how trauma affects the way we deal with stress and overtime can trigger fibromyalgia, especially in women.  Almost everyone in her support group had some sort of trauma in their life, as did Kelly.  Therapy is something that Kelly has done most of her life and continues to do.  Working through trauma is something that therapy can help with whether that be traditional talk therapy or other modalities like an intuitive healer or energy healer.

More and more of our food lacks the proper nutrition and more people are experiencing autoimmune disease.  Kelly cured her fibromyalgia and autoimmune disease by eating mostly an Organic vegetarian diet.  She uses turmeric (with 2 parts black pepper to properly absorb in your body) in her daily cooking.  This including cinnamon, cayenne pepper and anything in the ginger family all help with inflammation.  She takes magnesium supplements.  She claims that even organic meat causes flare ups.  She says she can feel immediately when a food is triggering an autoimmune response.  Her stomach bloats and pain is radiated throughout her body.  Almost as if poison is moving throughout her body and hurts.  Some major triggers of autoimmune disease are man made sugar and anything processed or chemically treated.

During this whole time never has any of her doctors mentioned nutrition, diet or wellness to cure fibromyalgia or autoimmune disease naturally.  She expresses how very few doctors actually look at the problem, they only want to medicate symptom.  She has been managing her inflammation with diet/nutrition for over seven years now with the occasional flare ups but is able to manage them better.  She has had an antibody test and there is no inflammation in her body since she has adjusted her diet and habits.

Kelly spent most of her 20’s overly medicated and suffering.  She wants to help anyone that she can to avoid being as she puts it, a “human science experiment” and begin their path to healing.  What works for her may not be the exact cure for you.  She encourages everyone to find what works for them.  Kelly suggests finding support with other people diagnosed who are working on trying to cure themselves.  Consider starting by eliminating high trigger foods such as man made sugar and anything processed or chemically treated.  Seek a therapy that works for you.

Movement helps to ease the pain.

Not every day is a great day for Kelly, it is hard to have a perfect diet and we can’t control everything.  Anything like lack of sleep can affect how we feel.  She has found solace in doing things she loves, like her job being a hair stylist.  She say’s that movement helps to ease the pain on bad days.

After talking with Kelly, I realize that it’s almost as if we need to change the way we think about autoimmune disease.  As if no one is immune to an autoimmune response.  Over time the body begins to react to what we are continuously putting in it and it can happen to anyone at anytime.  It is something we all need to be mindful of in our fast paced society.  Our environment plays a huge factor in how we feel.  Fruits and vegetables grown decades ago were much richer in vitamins and minerals than the varieties most of us get today.  The main culprit in this disturbing nutritional trend is soil depletion: Modern intensive agricultural methods have stripped increasing amounts of nutrients from the soil in which the food we eat grows.  When we shift our attention to preventative measures like managing our stress, diet and nutrition, we prevent disease.

Kelly has shared her personal Facebook to message for any questions and support you may need.  Please do not hesitate to reach out.