You know it is going to be an interesting and exciting interview when within the first few minutes Bee and I are discussing periods and menstrual cups.  I thought I knew everything as a women that concerned my vagina, but I was wrong.  Imagine the amount of money saved on tampons!  Ever think of your menstrual period as beautiful? Me neither, but Bee has a way of making the budding cup full of your own blood (for a lack of a better word) sound almost tasteful.  This is only a glimpse of the colorful, smiley, incredibly open girl named Bee Queener. 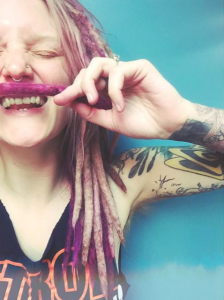 Bee is a certified yoga teacher who teaches young children yoga and self love.  She is also a massage therapist who is passionate about helping heal those dealing with sexual and domestic assault trauma.  Growing up, Bee experienced domestic violence in her household and from trusted loved ones as a young adult.  She developed an eating disorder at 8 years old, which she now realizes was a coping mechanism to have some sense of control

“I lost my voice in the summer of 2005- The year my family fell apart for the second time.  Being a young child of divorce, I had a well-developed system of support.  I had two homes with two rooms and enough love to make it around the earth thrice and back.  Privileged and well fed, with a bed for my head and yet I wasn’t comfortable.”

This is what reality looks like for many of us.  The pain of a wounded child bandaged up with masks and personas to take on the world.  How dare we feel unhappy or sad.  We stuff our pain down deeper and deeper until we no longer feel it and therefore know who we are.

To Get Over you have to go Through

There were several defining moments in Bee’s life that aided in her healing; massage school being one of them.  Bee was interested and drawn to body work.  She wanted to learn how humans worked on the inside.  Massage therapy opened her eyes to a whole new way of relating to her body, mind and emotions.

“I studied and learned to think about the body in a completely different way; like a machine made of organic matter.  This was something I never gave much thought to before massage school.  I realized with my knowledge in anatomy and physiology, I could help other people understand how their bodies worked, and how they could help themselves feel better and live more comfortably within their own vessel.”

After massage school, she attended an EFT Tapping workshop hosted by her work.  This technique allowed her to see her eating disorder for the first time.  Admitting her disorder to the group was the beginning of her 6-7 year path to recovery.  During this time, she realized the power of massage through her own emotional release in a massage session.  She saw her veganism as something she used to control her eating disorder.  It gave her an excuse to not eat; vegan options are much more uncommon at social events.

Later on, Bee was casted in the Vagina Monologues.  The show had been a space for immense support.  The show encouraged its members to discuss their lives in an open way.  Bee shared a few inappropriate experiences that bothered her while working for someone else.  Her fellow cast members encouraged her to quit and work for herself.

In 2012, Bee founded her own massage therapy business: Bee Queener Massage Therapy.  There wasn’t much thought involved due to the amount of support Bee felt from those she surrounded herself with.  She didn’t let her mind settle in doubt, “I tucked and rolled,” as she says.  Her business bloomed from the get go.  She gives credit to her success in the competitive world of massage therapy by staying true to her unique self.  Bee had always been an eccentric rebel which she has learned to fully embrace.

The Power in Sharing

After years of becoming more self aware through massage therapy, yoga and expression, with support, Bee feels she is finally close to being fully recovered from her eating disorder.  She is still learning and realizing coping mechanisms picked up in order to deal with the trauma she experienced growing up.  Admitting her disorder has been the key that has allowed her to begin working on her pain; ultimately being real to herself and others.  Being honest and truthful is something Bee feels is a vital part in healing.

“I think a lot of these mood disorders are a coping mechanisms.  For me it was a control.  I couldn’t control my family situation but I could control my food intake.  By restricting, I was able to dictate that realm and sadly, being thin “is in” so it was positively reinforced by friends, family and culture.”

Bee does not feel like a victim.  She is not angry nor mad.  Bee does not hold any negative emotions against others for the coping mechanisms she picked up as a young child.  She does not blame others for the pain she feels.  Bee has gained much awareness through her eating disorder and knows that she is responsible for how she feels.  She enjoys sharing her truth because she believes in the power of being real to herself and others.  The more real we are, the more able are to accept and move through our pain and suffering.

The Beauty in Being Well-Received

Bee is passionate in helping others heal from trauma, especially those suffering from domestic or sexual abuse.  Through her own experience, she believes massage and yoga can help release emotional pain which is necessary to heal.  Reclaiming your body is such a big part in healing from abuse.  Massage Therapy requires touch; it can help you become comfortable in your body again.

Bee knows what its like to be stuck in fear.  She wants others to connect the correlation with the mind/body.  To find the freedom in realizing we must also heal our minds if we ever wish to heal the relationship with our bodies.  Sexual and domestic violence, as well as eating disorders, cause people who experience them to put walls up/to hide.  She believes, through bodywork and massage, she can help people feel better in their bodies and be more inclined to take care of them.

I was struggling so much with my mental illness, that was the hardest part- people didn’t understand my struggles and insecurities BECAUSE I still didn’t understand them.  Through healing my body and mind, I have gained this ability to be transparent with my struggle and I believe there is great freedom in vulnerability that others can appreciate too. The beauty in being well-received is a gift I am forever thankful for.

You can book a massage with Bee here.  She is also a board member of the Mid-Michigan Massage Therapy Institute  (MMMTI) which is a non-profit that offers massages for free for those in financial distress.  If you or someone you know is suffering from pain (physical or emotional) and could benefit from even just an hour of relief to feel good, do not hesitate to reach out to MMMTI, even if you feel you are undeserving.  Everyone deserves to heal. 🙂

What is a Healer and an Intuitive Healing?

Road Trip – Algonquin Provincial Park, Canada – Where to Stay and How to See Moose