El Dorado, the lost city of gold, is a folklore tale from the 16th and 17th centuries.  A legend of a city that promised Europeans great treasure in the new world.  It is unclear if treasure was ever found, but some say what was found was different than what people were expecting.  It now represents mans constant quest for love, wealth, happiness and success.

I sometimes think we are all on a quest for our own city of gold.  Whether that be happiness, freedom or completeness.  Most of us believe something like riches will be the thing to fulfill us.  Seeking is almost always an endless endeavor.  In this world where more is better, Erin Gavle created Eldorado General Store as a space to let go of the search and allow yourself to feel complete.

Erin Gavle is the owner and founder of Eldorado General Store in historic Corktown, Detroit.  “Eldorado is a well-curated vintage general store that’s stocked with one of a kind trinkets and treasures from this journey.  Vintage clothing for men and women, handcrafted accessories, gathered talisman, worldly household items and locally made goods fill its sun-bathed shop. It’s a paradise of lost treasure or perhaps a found dream.  Eldorado is for inspiring minds, free-spirited hearts and revolutionary souls.  It’s for the believers in the magic all around us.” 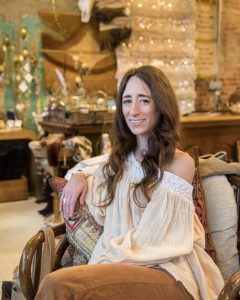 Erin was born and raised in Michigan.  She studied Creative Advertising at Michigan State.  Her career path was always pushed towards business, she could use her creative talents and make money.  Post graduation she went back to school in Miami.  She traveled and continued to take classes while working in real world agencies.  She found her way to Chicago and eventually to New York working in Advertising.

I loved advertising, I feel like I wouldn’t be here without all of the knowledge I have learned from my career.

While working in what can be an exciting, creative, yet stressful field, she was told something that struck a cord, “Maybe you should care less about what you are doing.”  This bothered her.  She thought maybe she is meant to be doing something more or different.  She began to feel the pull to turn inwards.

Erin became curious to see what was possible that she could create on her own.  She wondered if she could find a bigger purpose or something that was more fulfilling.  She thought about this a lot and eventually decided to quit corporate america to focus on herself.  In 2013, she put a pause on life.  She moved to LA, practiced a lot of yoga, went to burning man and thought she was going to make jewelry.  During this time, she had a conversation with a life coach who asked what her dream was and what was holding her back from it.  She did not know exactly what she was going to do, but she was beginning to imagine what that might look like.

Opening a store was never a part of Erin’s plan.  During a visit home to Michigan she found a journal entry that she wrote when she was 18.  It listed things she wanted to do in her life and one was open a boutique by the time she was 40.  She didn’t even remember that she had wanted to do that.  She considers this a friendly reminder from the universe and a gentle push in the right direction.

Detroit can be considered a lost city of gold.  Once a bustling city full of promises of opportunity and riches.  At the time, Detroit was a place no one wanted to be a part of or open a business in.  The city had just declared bankruptcy and population was at an all time low.  Even so, Erin felt drawn to Detroit.  During her visit home, she had time and wanted to re-introduce herself to it.  She spent a couple weeks driving around, going to art galleries and sitting at coffee shops.  She fell in love with Corktown and the small community that was already established.

She noticed a vacant building where she envisioned a boutique could be.  She felt she needed to act and immediately reached out to real estate agents to find out who owned the building and if it was for sale.  She waited patiently for a month to hear a response.  Eldorado opened in July of 2014.

And now this is a place where I can make jewelry if I want to.

It took vision and risk to see something where there was nothing.  People were just as excited to see Eldorado open as Erin was.  They would express how happy they were to see lights on in a place that had no lights for over a decade and a half.  It was a sign for better things to come.

Erin is a walking example of what Eldorado is all about.  Part of Erin’s personality is to go with her whim and live creatively.  Erin credits the success of Eldorado due to her vision of it being like an art project.  Erin has always been an idea person and challenges if things can be done better.  Everything she does is looked at as a creative challenge.

Eldorado is a platform for her to express her own and other’s passions that belong to the community.  She can also support things that matter to her like fair trade practices, reusing and educating her customers about who their money supports.  She wants people to feel inspired, share the work they make and keep money in the area.  She is grateful for the risk others took in talking about and supporting Eldorado.

I thought the higher I climbed and the more money I made, that I was going to gain a higher view.  I realized not a lot of people were actually happy up there.

During what she calls it her hard restart, she had to access what success meant to her.  Success used to be defined by wealth or status.  She realized that the relationships she had with her friends and family were more important.  To have a sustainable relationship was something she wanted, so she needed to redefine her priorities.  It was important for her to take the time to tune into herself in a safe judgment free place, something she now provides for others when they walk into Eldorado.  To this day, she continuously evaluates what ideas and beliefs she can shed that society has played a role in to be more aligned with herself.

We have to make our voice of love over power any self doubt or fear.

As Erin and Eldorado evolve, she wants to see what more she can do for the community.  Some events that Erin has founded is the 3rd annual Corktown Aglow on December 8th, which is a holiday event to highlight all of the successes the community has experienced over the past couple years.  It includes a free historical tour, tree lighting, santa, free crafts and activities and a way to introduce yourself to the Corktown community.  Spring into Corktown is a similar event hosted during Spring.

“Inspiration is essential to overpower insecurities that live in most of us.  They are daily battles that take work to move through.  Believe in yourself and trust your intuition.  Do whatever you need to do to safely trust yourself.  Find what makes you feel centered, balanced and calm before you make any decisions.  Believe in what you are doing so other people can jump on board.  If you are wishy washy, no one else can fully commit either.  Being open to what else can be achieved while simultaneously sticking to following your heart.  Find a good support system.  Start speaking out loud.  Dive in.  Google the business stuff, talk to people, ask questions, but don’t let the details hold you back.”