You can tell we are heading into a bigger city by the amount of people and infrastructure.  We walk along a busy road most of our way into the city of Leon. Our group slowly couples off and separates as we all feel the need for some alone time and change. I feel sadness, knowing that I may never see these people again, all awhile feeling the urge to walk alone again. It is bittersweet. 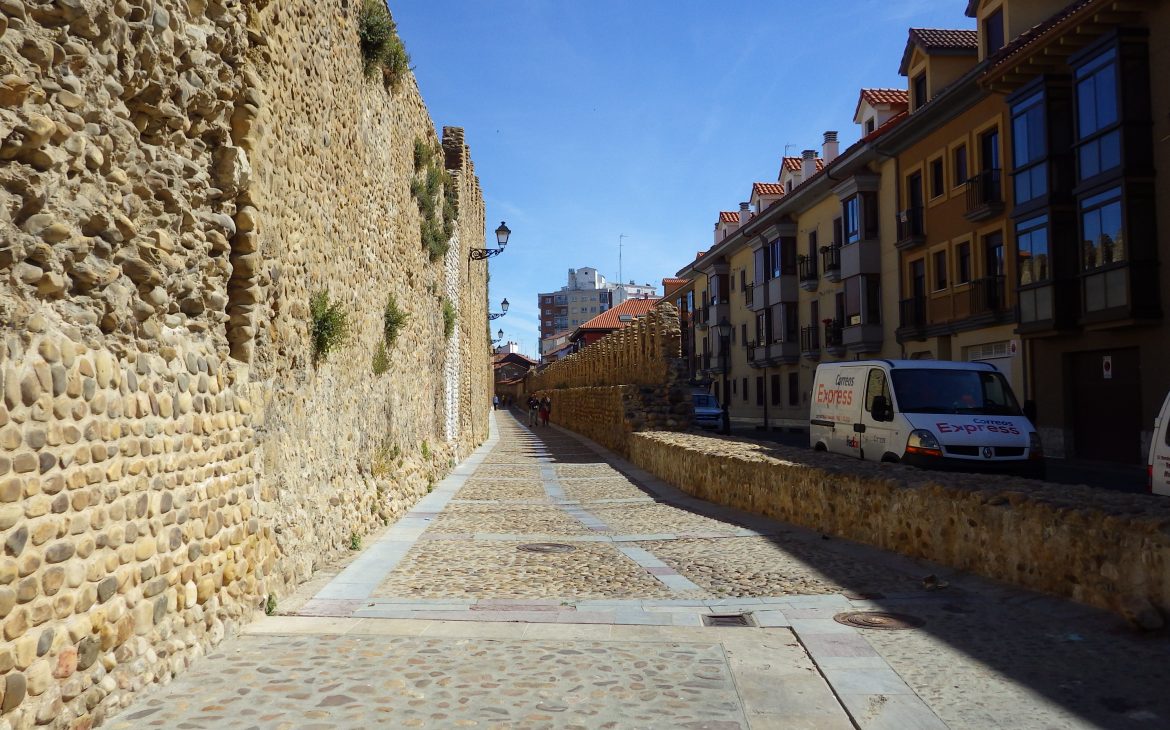 We all head our separate ways. I decide to splurge on a hotel room. I still have most of the money I started with. Most of the time I opt for albergues that are donation only, paying around $5-$10 for the night. Other times I plan ahead and call to make a reservation to stay at a private albergue; costs around $30 for the night. These places are most desired because they sleep less people, usually around 12 or so. They offer home-cooked dinners for a little extra fee and have nicer rooms and beds. Monasteries or convents are donation only with minimal amenities, but are great because they usually have a guaranteed bed open, sleeping around 40.

I have heard about the paradors from other pilgrims along the way. They describe them as converted hotels with history owned by the government.  Usually a once in a lifetime stay. San Marcos is a former monastery and hospital in the city of León, Spain. It is now a parador, and includes a church and museum. It is absolutely magnificent.

Walking up to the building, I am reminded of the movie, The Way. This movie, which I had watched some time before I decided to take this trip, was the inspiration for why I chose to embark on this type of holiday. I had never heard of the Camino de Santiago before watching The Way, which i’m sure most Americans can say the same. I feel I am in a movie often on this trip; walking up to an 18th century Monastery. I am dirty, tired, smelly and have nothing but the bag on my back. Most guests are tourists, traveling to this historic city to wine and dine. Today I feel like a pilgrim, but I don’t care. I am proud of it and nothing will stand in my way between me and a hot bath. 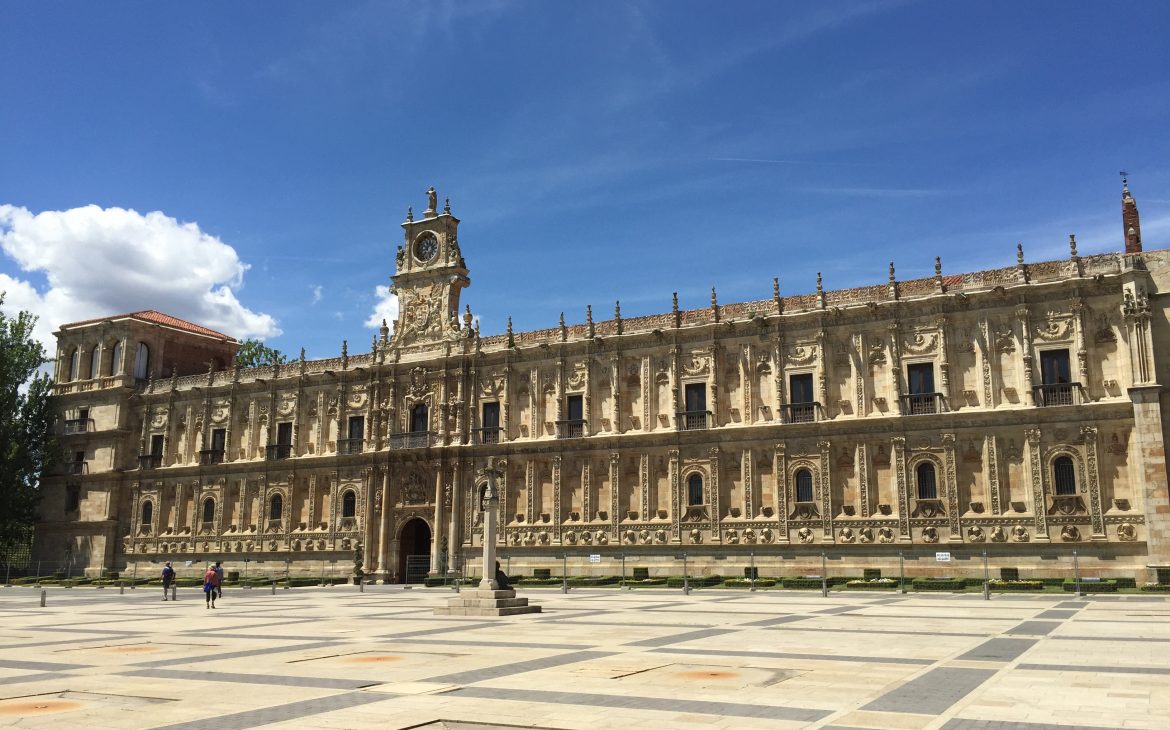 Originally a more modest pilgrim hospital built by Dona Sancha in the 12th century it became the headquarters for the Knights of the Order of Santiago which was formed to protect the pilgrim way. The facade is a storybook in itself with many pilgrim motifs including the sword of Santiago entwined with the lion of San Marcos. A profusion of scallop shells cove the pediment of the church (and museum) entrance. 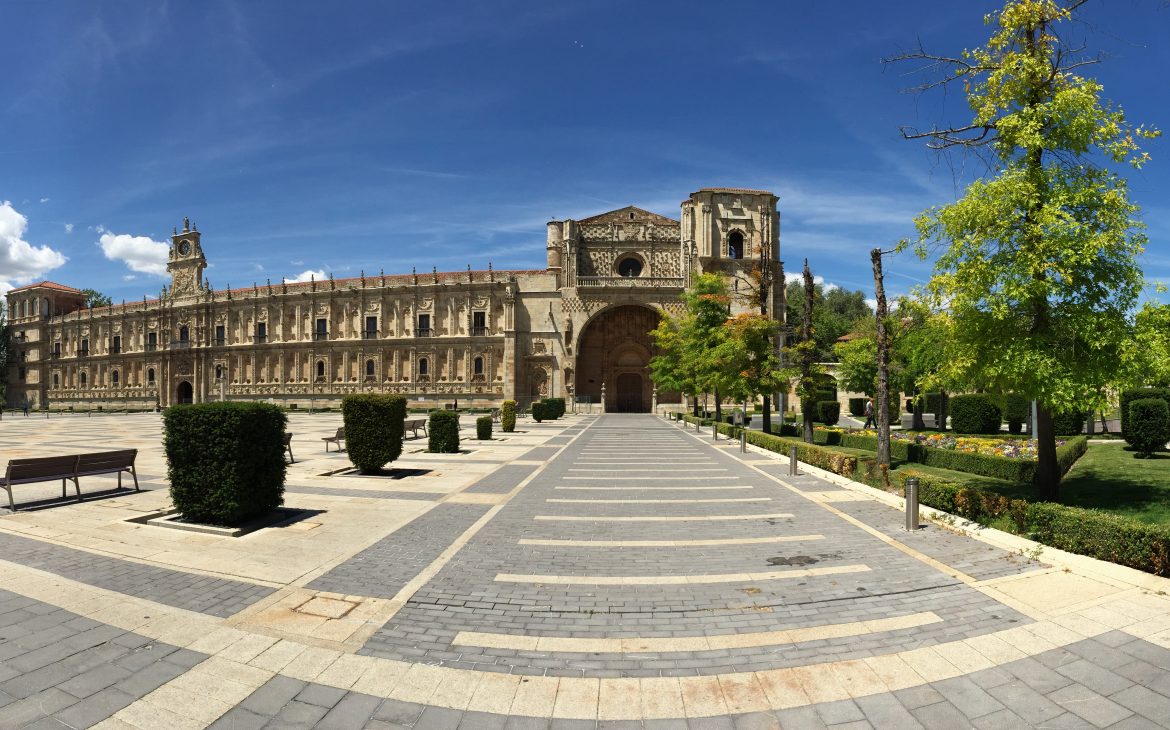 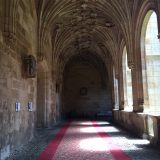 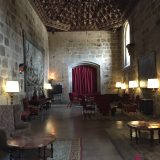 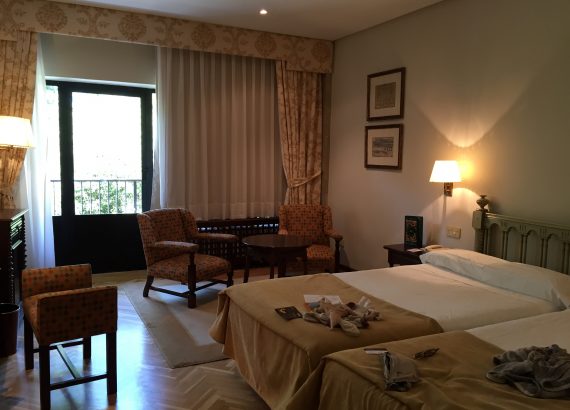 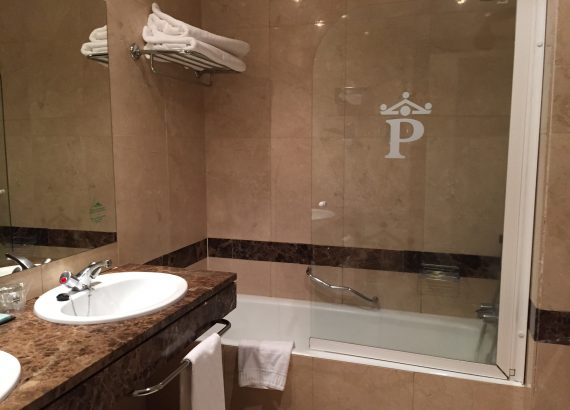 The history of Leon is a former Roman military garrison and base for its VIIth Legion, hence the name – Leon. Later it became the capital of the old kingdoms of Asturias and Leon. Conquered by Visigoth, Moor and finally Christian forces. There are many sites to see in Leon. Here every period and style is seamlessly accommodated: from Roman remains which support the medieval walls to the exquisite Romanesque Royal Basilica of St. Isodoro, the Gothic splendour of Leon Cathedral Pulchra Leonina, the magnificent intricacy of Renaissance San Marcos with its Plasteresque facade, the controversial austerity of the neo-Gothic in Gaudi’s Casa de Botines, to the modern edifice of Leon’s superb museum.

Catedral Pulchra Leonina, 13th Century Gothic Cathedral. The cathedral is renowned for its magnificent 125 stained glass windows set high in the walls that shed such a lightness of touch to the interior. A conservatory that instead of keeping out the light, as most Spanish churches do, actually invites it in. Showering this mosaic of colour all over it to become the gayest church in Spain. One of the chief functions of the medieval church was to instruct the illiterate and to give them pictures they could understand. To show them the story of the Gospels and the legends of the Saints. 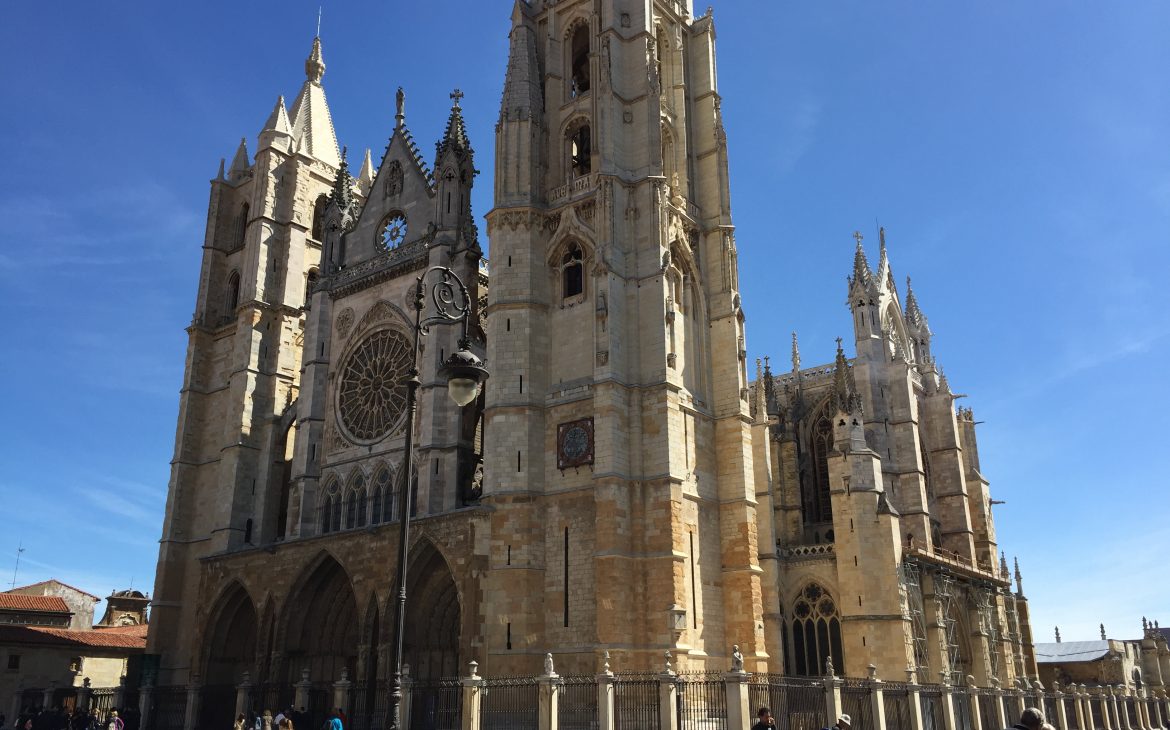 Gaudi’s architectural masterpiece, the neo-Gothic palace Casa de Botines. This structure marks an historical and artistic turning point. It is one of the first monumental buildings constructed with private funds as a secular, middle class statement. Heretofore, buildings of this magnitude were funded by religious institutions or the aristocracy. 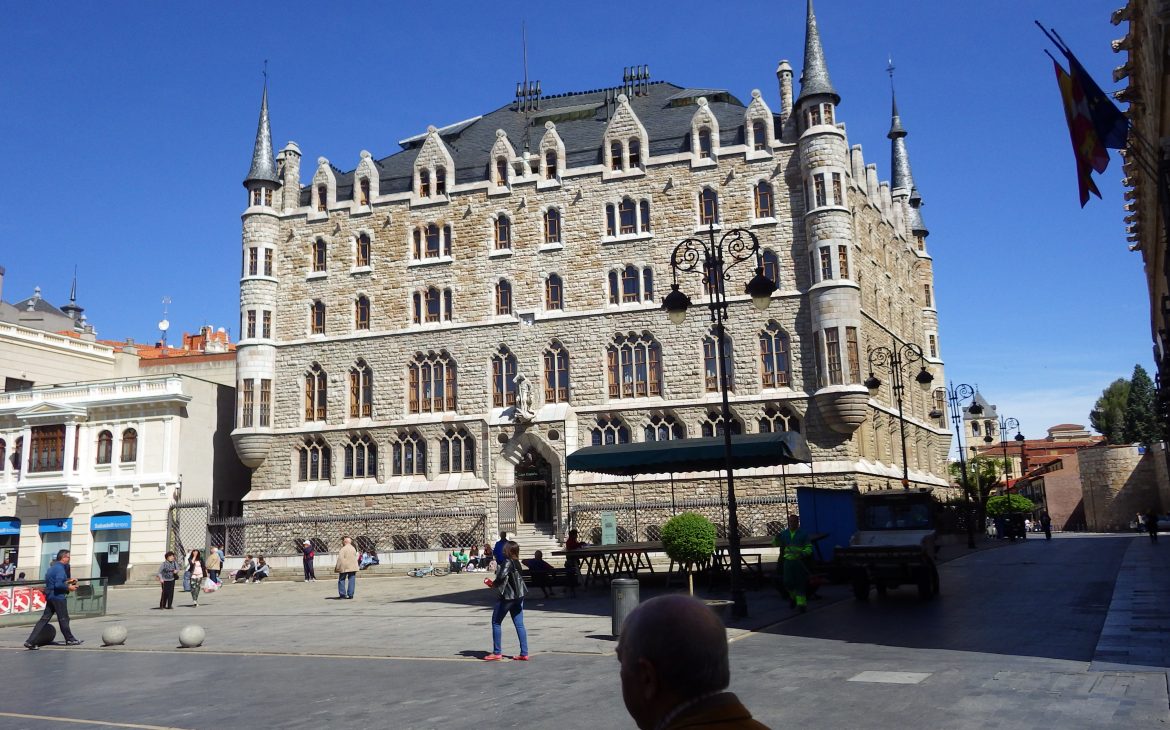 Here, bedded into the Roman foundations and the medieval city wall, is this wonderful 11th century Basilica Church. The ramins of San Isidoro were brought here from Sevilla to be buried in Christian Spain as the south was still under Moorish influence at that time. Admire the Door of Forgiveness Puerta del Perdon through which medieval pilgrims, too ill to travel on to Santiago, could still receive the same indulgences. 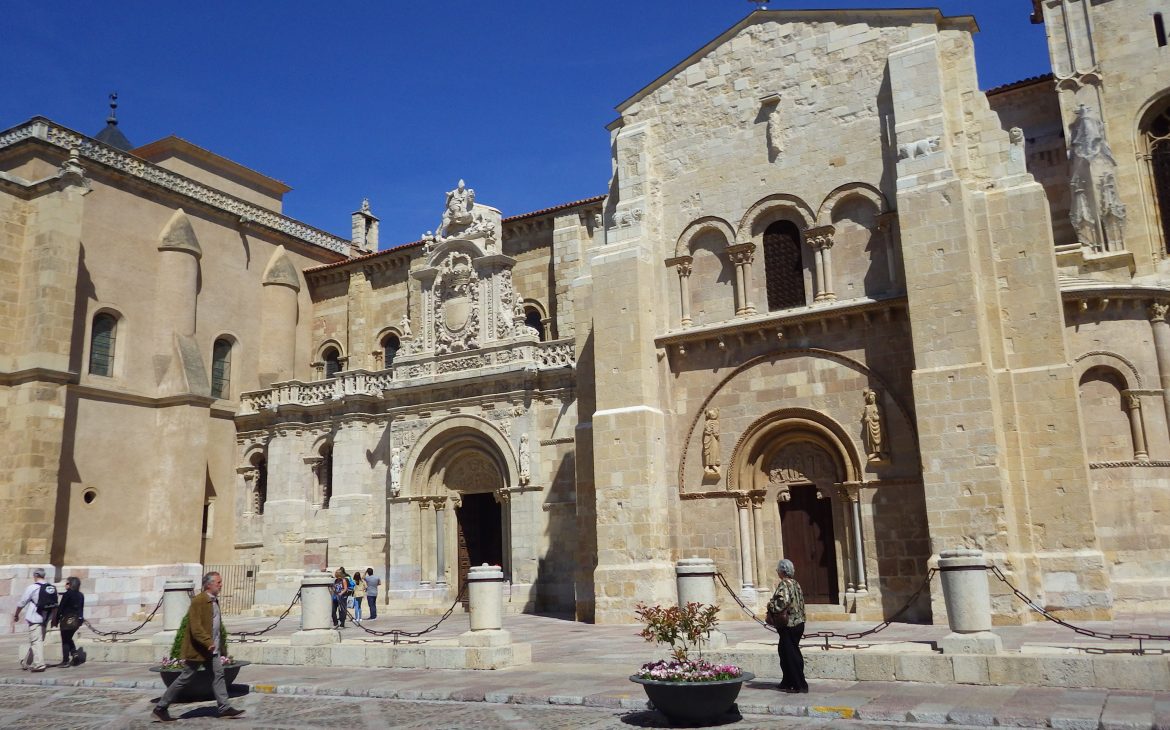